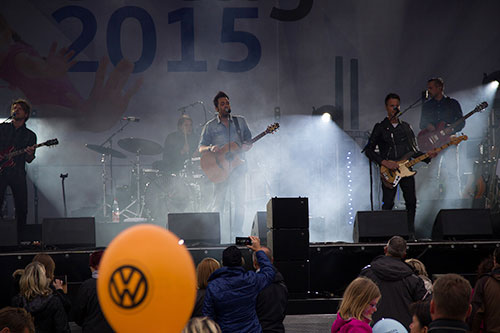 On Sunday (06.09.2015), Volkswagen Sachsen GmbH marked their 25th anniversary with a large family day. Around 60,000 guests got to enjoy a blast of information and technology, games and music. At the end of the event, Laith Al-Deen played as the main act before the fireworks display started. The main stage was set up by Jugl Veranstaltungstechnik with systems from Kling & Freitag. For the expected crowd, the organiser’s request was to fill a space the size of medium-large festival area with sound.

So 56 K&F SEQUENZA 10 N/W units in 4 flown rows were used. Christian Hempe from the contracted company Jugl Veranstaltungstechnik also decided to use 18 K&F NOMOS XLC and 18 K&F SEQUENZA 10 B units, based on the calculations of systems engineer Dirk Stirnimann. As front fill, three stacks with 3 K&F SEQUENZA 5 each were positioned on the XLC to cover the audience areas near the front of the stage. “Due to the height of the stage structure, we decided with the client to limit the systems to 70×80 m throw distance”, said Dirk Stirnimann who configured the system in advance and was also involved as a systems engineer based on his extensive experience with large-scale assignments with K&F systems. “I was very pleased to have Dirk Stirnimann with me to take care of the system”, said Christian Hempe, managing director of Jugl Veranstaltungstechnik. “All decisions ultimately proved to be dead on and at the end everyone involved was impressed by the handling and sound of K&F SEQUENZA, even though a different technology had initially been requested”, added Christian Hempe.

Current and former employees were invited with their partners to the 25th anniversary of Volkswagen. In the factory tours, all production departments could be visited and exhibits tested. The vehicle plant in Zwickau opened almost all production areas to the guests. Motorenwerk Chemnitz and ‘Die Gläserne Manufakur’ in Dresden also presented themselves in Zwickau.

With its three production sites in Saxony, Volkswagen looks back on this year as its best since its foundation 25 years ago. The general representative of Volkswagen AG Prof. Dr. Siegfried Fiebig and chairman of the general works council of Volkswagen Saxony Jens Roth extended their thanks to the employees and alumni for this. The family celebration was the high point of the anniversary year of Volkswagen Sachsen and, despite the mixed weather, a complete success. Over 1,000 participants designed a diverse program covering three stages. Bands from employees were received just as well as the region’s popular group “SK5”.

This successful family day provided fun and information for 60,000 visitors, as well as an excellent sound experience.