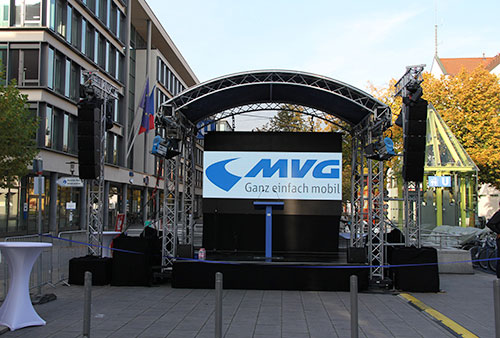 In the second weekend in October, the Munich Transport Corporation (MVG) hosted a town festival, where they introduced their new service – bike rental. MDS PAtec delivered the complete technology to two locations, using exclusively Kling & Freitag SoundSystems for the sonication.

A stage measuring 6 x 4 metres, which was used at the town festival, was equipped with 18 SEQUENZA 10 N / W and 6 SEQUENZA 10 B elements. 4 GRAVIS 12+ N elements were used to provide well-balanced acoustic coverage in the near field. The town festival had a mixed programme – live bands, speeches and music from DJs ensured a good atmosphere for the well-attended event.

The new bike hire system “MVG Rad” at the Schwanthaler Höhe underground station was launched by Lord Mayor Dieter Reiter and MVG CEO Herbert König. Here too, MDS PAtec Veranstaltungstechnik set up the stage with a 4 mm LED wall and a Kling & Freitag PA with 12 SEQUENZA 5 W, 4 SEQUENZA 5 B and, in the near field, 4 GRAVIS 12 elements, which are operated as usual via the K&F SystemRack.

With their year-round service, and in contrast to the rental service of the German railway operator Deutsche Bahn (DB), MVG now provides the opportunity to rent bicycles in the winter. In the first stage, there are initially 1,200 bicycles at 24 stations. Already next year, the offer will be extended to 125 rental stations in the city of Munich. Lord Mayor Dieter Reiter was pleased that the people of Munich can now use the beautiful autumn days to try out ‘MVG Rad’. Over a thousand rental transactions were already made in the first 4 days.