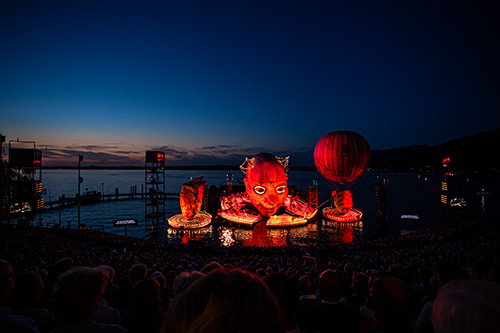 The Bregenz Festival is without a doubt benchmark in so many things. The spectacular production and the stage in front of the breathtaking backdrop of Lake Constance are just some of the many unique selling points of this fantastic institution in the European cultural landscape.

Since 1999 the Crew in Bregenz have been working with loudspeakers from Kling & Freitag and quite a few of our systems have been specially adapted or specially developed for the floating stage. This year, too, we were able to do something to further improve the fantastic immersive 3D sound experience. With our under-seat loudspeaker “LINUS”, which was specially developed for this application, very early reflections of the direct signal are passed to the listener from below in order to create a significantly more direct sound image, but to leave the location clearly on the stage by means of clever time alignment. The image becomes clearer and fresher without distracting in the least from what is happening on stage.

The unique technologies “Bregenz Open Acoustics 2.0” for source positioning and the outstanding reverberation system “VIVACE” from Müller BBM create a sound impression in the open air in Bregenz, as if you were sitting in a large concert hall. The Vienna Symphonic Orchestra is broadcasted every evening live from the Festspielhaus next door to the loudspeaker system of the lake stage and reproduced in their full dynamic. If you close your eyes for a moment, everything is simply in the right place. Every instrument and every singer can be precisely located, all subtleties are displayed in the highest resolution.

We are proud to be a part of this breathtaking experience for so many years.

Here´s what other people say about it:

„When they take a seat in the area in which the LINUS is distributed while the sound is running, the audience shouldn’t get the feeling that they are also being sounded from below. Only when you switch off the under-seat sound system do you notice the drastic effect that the LINUS produces. The sound image becomes significantly smaller and moves far towards the stage and thus away from the listener when linus is not active. To put it the other way round, the LINUS generate an effect of being really close to the music that we would not otherwise have achieved. Once you’ve heard this closeness compared to the actual distance to the stage, you don’t want to be without it.“

„The loudspeakers used have to meet a large number of very special quality requirements for the spatial sound generation on the extremely wide grandstand of the floating stage. In various extensive comparative tests both on the floating stage and in our laboratory it has been shown that the Kling & Freitag solution achieves exactly the required precision in radiation behavior together with a very nice sound quality. It was a very nice surprise that the high expectations from the test setup were even clearly exceeded by the final installation.“

„The Bregenz Festival spared no expense (namely an impressive 2.5 million euros) to completely renew its“ Bregenz Open Acoustics ”BOA, which was in existence for 15 years and was revolutionary at the time, and to replace the previous loudspeaker band with 29 loudspeakers placed on posts to replace. What previously sounded excellent, now sounds phenomenal.“

„The fact that Julia Jones (for the first time a woman is conducting the play on the lake) has the Vienna Symphony under control and knows how to dose at the right points is just as crucial as the phenomenal sound system, which makes it possible to play arias at the lake To reach the audience without having to scream your soul out. Emotion and expression benefit equally from this.“