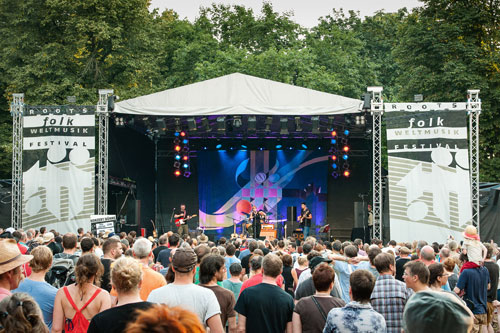 The audience in Rudolstadt has experienced global pop from Spain and the vocal play of the Inuit, classical Iranian percussion and techno-trance from Turkey, Norwegian folk rock and German-Lebanese Ethno Jazz. Here, newcomers from all over the world stand alongside established names from the roots, folk and world music scene, masters of traditional styles mixing with artists that set future trends.

The musical richness, its contrasts and cross-genre projects provide plenty of space for new discoveries and add to the unique charm of the festival. Add to this the summer scenery of the Thuringian town located directly on the Saale river, where the Heinepark lies with two main stages surrounded by greenery, the Heidecksburg castle sits high above the town providing concerts with panoramic views and the intimate settings of the local churches and theatres play host at some of our most popular venues. Overall, more than 20 stages are spread over the entire town. Many crowd pleasers include the concerts of the RUTH German World Music Awards, the appearance of the Saalfeld-Rudolstadt Symphony Orchestra and, of course, the many differing varieties of buskers.