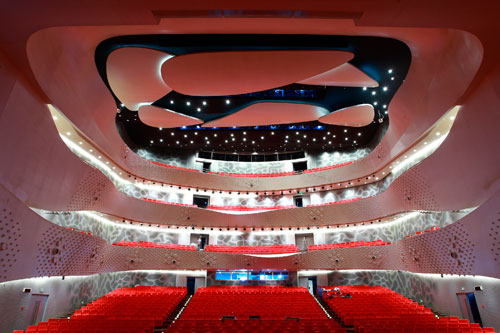 “Dalian International Convention Center is comparable to the world famous modern buildings. As one of the new world landmarks, it will also create a new urban lifestyle.”, said Wolfgang Haid, the architect in charge of this project. Dalian International Convention Center, 59 meters in height, covers an area of 4.3 hectares and a total construction area of 146,800 square meters. The underground floor is used as a garage and logistics service space. There are also four overground floors, including a hall on the first floor, a multi-media workshop, equipment room and comprehensive service area on the
second floor, a multi-functional hall with a capacity of 1,800 people and 6 large and medium meeting rooms with a capacity of 300 to 800 people on the third floor.

On the fourth floor, there are 26 small meeting rooms covering 60 to 80 square meters each, two 32-seat multi-functional VIP rooms and two multimedia meeting rooms. The 1,650-seat grand theatre stands at the central area from the second floor to the fourth floor, which is designed for various activities like large theatrical performances. Participants, guests, media and actors all have their own space and path to get in or out.