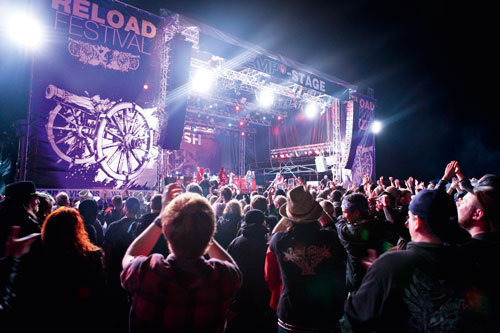 For the seventh time the Reload Festival in Sulingen in northern Germany enticed by a very special line-up. Bands who played as headliners at the biggest festivals in the end of the nineties were succeeding on stage one after another. The organizer deserves respect, setting up such a line-up, for the exaltation of the public. Besides the headliners Slash, Dropkick Murphy´s and The BossHoss, the “New Yorker Crew” like Biohazard, Dog Eat Dog, Madball and others were particularly appreciated. All in all it was a very successful strike this year.

There was the full technical equipment. The stage had a play width of 14 m. In total, 15 SEQUENZA 10 N/W per side with 22 NOMOS XLC were covering the space. Two Line 212 on each side were used as out- and frontfills. “For the SEQUENZA 10 I chose the full-range LS-block because I did not dispose of the flown basses SEQUENZA 10 B, and I equipped them with a lowcut from 80 Hz, so I could realize peak levels of over 126 dB with the system from the FOH seat,” said Bertram Zimmermann.

He got lots of experience, also on other systems, and is glad to work with the SEQUENZA 10. “Thanks to ‘Snap&Fly‘, the quick and easy rigging system – I can’t configure any other system in that short amount of time.” High performance and efficiency in one system – that’s what you need to provide a perfect performance in front of the stage.