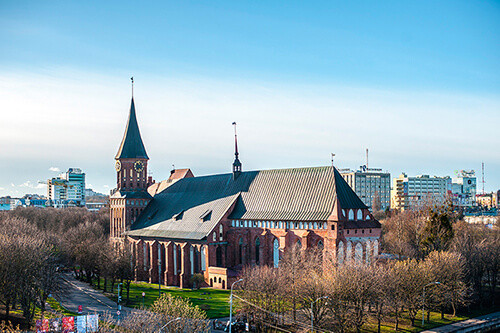 The Kaliningrad Cathedral is graceful, stately, and has endured a broader tranche of history than is obvious at first glance. First built in the 14th century, it was destroyed by fire in its third century. In 1992, it was rebuilt yet again, becoming yet another important symbol of change and endurance. It’s home to Russia’s largest pipe organ, as well as the tomb of philosopher Immanuel Kant.

The cathedral was designed for a narrow range of acoustic properties, specific to the human voice, limited instrumentation and most importantly the pipe organ.

Since the reconstruction, the cathedral has gained a new life within the community. To really fulfill that promise, though, it needs to be a living center, a place where people gather to engage in new projects and express new ideas.

Today, the cathedral is used for pipe organ concerts in one direction and for amplified performances the space is used in reverse, with the stage at the other end.

The Chief engineer for the project, Petrenko Matvey Vladimirovich , explains: “There is too much reverberation here. Conventional speaker systems aren’t up to master the acoustic complexity and deliver detailed, intelligible sound.”

Yevgeny Kobylyansky is both a composer and head of the project for the new sound reinforcement design. His goal was for the space, the microphones, the speakers, and the control interfaces all to act as essentially one large musical instrument.

To do so, he turned to KLING & FREITAG’s VIDA beam steering array speakers to create a custom acoustic/sound reinforcement design.

It began with the placement of six K&F VIDA L speakers, installed in arrays of three on each side of the performance area. They comprise a total of 288 individual amplifier and digital signal processing channels that allow a very precise control of the sound beam.

Next, they added the rear-facing K&F VIDA C cardioid sub modules to the back of the arrays to further enhance the sound quality for the performers by minimizing low frequency spill onto the stage. The combination of K&F VIDA L/C tightly focuses sound to cover only the audience area and is reducing the unwanted room excitation to a minimum, which is the key of the solution.

K&F SCENA 12 stage as well as K&F PASSIO speakers in order to fill in areas behind the large columns completes the new system and this reinforcement brings the cathedral into a new age and a new life.

„Everybody is very pleased by the sound quality of this installation,” states Petrenko Matvey Vladimirovich Chief Engineer of Russian KLING & FREITAG distributor AUDIO SOLITIONS and adds “so, now organ, chamber, choir and other music genres will be enjoyed here.“