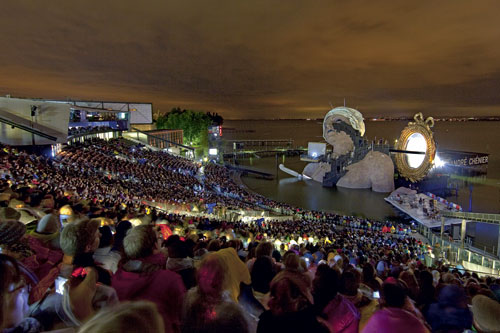 Opera in four acts in Italian language. Music by Umberto Giordano. Libretto by Luigi Illica. France in the year 1789. Nobility is feasting, citizens are grumbling. And between all chairs: the poet André Chénier. Loved by the rich because of his sensitive verse, but in his heart a revolutionary. André Chénier, the most famous work of the Italian composer Umberto Giordano, is a historical drama with brilliant acuteness and a human tragedy of upsetting intensity. The opera is outlined in front of the background of the French Revolution, and it is equally enthralling as a passionate love drama and as historical detective story. In the center of André Chénier is the French poet of the same name, a historical personage during the confusion of French Revolution who initially is a fervent supporter and then persecuted without mercy, finally ending himself on the guillotine.

The composer integrated into his music historical dances and marches from the time before the French Revolution and also the well-known sounds of revolution, such as “Ca ira” and the “Marseillaise”. They are accompanied by moving arias and stirring duets which conferred to the opera its unique character. It is as if André Chénier had been exclusively composed for the sea stage of Bregenz. This opera is offering a perfect mixture for this place: An enthralling plot and four strong characters, prisoners between the excesses of the Ancien Régime and the terror of the French Revolution. There are André Chénier, the idealistic poet and his antagonist Carlo Gérard, formerly butler and now revolutionary gang leader. And there is the young noble Maddalena who is fleeing from the insurgents, assisted by her housemaid who is working as prostitute in order to provide subsistence to her mistress. The music of Giordano is Verismo of very first quality, pushing forward the high suspense of the plot with breathtaking speed.