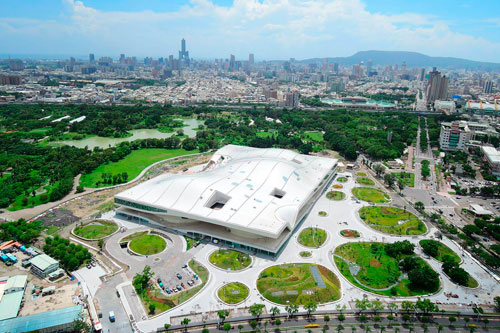 “The National Kaohsiung Center for the Arts symbolizes the transformation of Kaohsiung, once a major international harbour, into a modern, diverse city with a rich cultural climate. Mecanoo designed the National Kaohsiung Center for the Arts, located on a former military terrain, as an integral part of the adjacent subtropical park to have a positive social impact on the residents of Kaohsiung whose population counts almost 3 million.

Inspired by the local Banyan trees with their iconic crowns, the vast, undulating structure is composed of a skin and roof, and connects an extensive range of functions. The curved steel structure was built in cooperation between a local and a Dutch shipbuilder. Underneath this roof is Banyan Plaza, a generous, sheltered public space. Residents can wander through here day and night, practice Tai Chi or stage street performances along walkways and in informal spaces.

An open-air theatre nestles on the roof where the structure curves to the ground, with the surrounding park forming the stage. Designed with the subtropical climate in mind, the open structure allows the wind to blow freely through Banyan Plaza. The seamless flow between interior and exterior creates opportunities for crossovers between formal and informal performances.

Different theatres such as the 2000-seat concert hall and 2250-seat opera hall are located in the five cores or ‘legs’ of the building where the structure meets the ground. The cores connect with one another via foyers in the roof and an underground service floor which houses the backstage area of each theatre.”