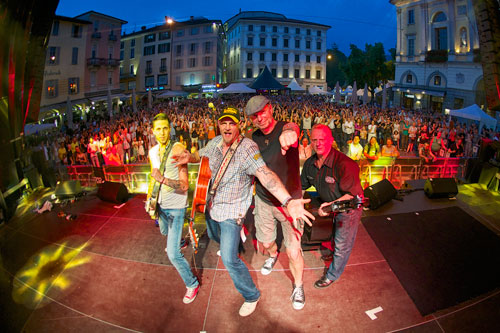 With a total of 70,000 visitors and 25,000 Harley-Davidson motorcycles, this is the largest biker event in Switzerland and one of the largest in Europe. This is the fourth time that Swiss Harley Days has taken place in the idyllic city of Lugano in southern Switzerland. A special highlight of the event was the parade of over 10 kilometres on Saturday, which was made up of 3,500 motorbikes, and also two air shows from parascouts and the PC-7 aerobatic team from the Swiss Air Force on Saturday and Sunday and, of course, the seven concerts on the stage which was built in the middle of the city centre.

With its back toward a lane separating two rows of houses, the stage with a width of about 20 metres was built so that there would be as much space as possible for the audience. Long before the event, technical director of Megatron Veranstaltungstechnik Dirk Stirnimann planned and simulated the audience area in the town square and then built the set design.

The main sound was configured with 12 K&F SEQUENZA 10 elements to the right and left of the stage, and a total of 12 NOMOS subwoofers, and it was enhanced by smaller GRAVIS systems for the front and side fills. Megatron also placed K&F GRAVIS and LINE units, as well as NOMOS basses, directly on the stage as monitor systems.