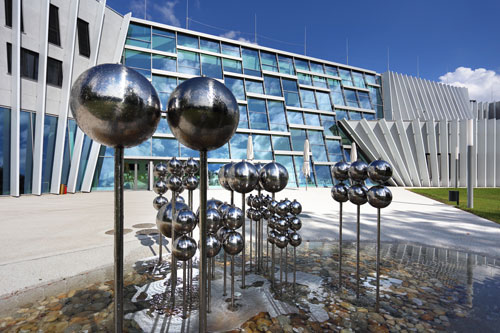 Even though the Anton Bruckner Private University has only been known under this name for a short time, musical education in Linz has a tradition stretching back more than 200 years. As early as 1799 the city musical director Franz Xaver Glöggl, a close friend of Michael Haydn, Mozart and Beethoven, founded the first music school in Linz. Then in 1823 the newly founded Linz Musical Society set up a singing school – the real precursor of the Anton Bruckner Private University.

The attempt to persuade Anton Bruckner to become director of the Music School in 1863 was unsuccessful. But another important name – the Bruckner biographer and former secretary to Franz Liszt, August Göllerich, – was in charge of the newly strengthened institute from 1896 to 1923. And in 1923 the name of Bruckner was finally established with the upgrading of the Music School to the Bruckner Conservatory Linz – now renamed the Anton Bruckner Private University.

The original main function of the forerunner institute, which was to raise the quality of musical life in Linz by improving the training of amateur musicians, was taken over by the Linz Music School in 1950. From that time on the Bruckner Conservatory established itself progressively as a training ground for professional musicians. This development was carried through by the directors Carl Steiner (1945-1958), Wilhelm Jerger (1958-1973), Gerhard Dallinger (1973-1990), Hans Maria Kneihs (1990-1995) und Reinhart von Gutzeit (from 1995-2006), Univ. Prof. Anton Voigt (acting Rector from 2006-2007), and Dr. Marianne Betz (2007-2012). In autumn 2012 the Rectorship of the University was taken over by Ursula Brandstätter. From the 1990s on, the Bruckner Conservatory developed from a higher music school into one of the most active cultural centres in Linz. The educational spectrum of the former Bruckner Conservatory was likewise continuously expanded and became the educational basis when private university status was attained in 2004. The Anton Bruckner Private University now offers twenty two separate branches of study and three university courses in the fields of classical music, jazz, drama and contemporary dance. Students may study for the degrees Bachelor of Arts or Master of Arts, which are on a par with those of other European universities and Arts Academies.