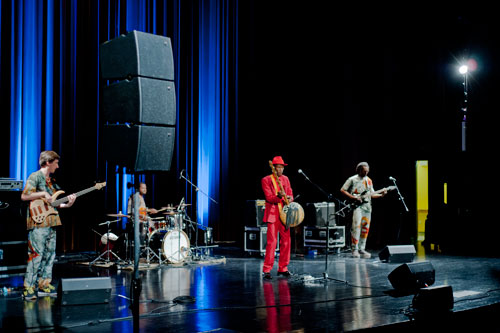 For the last few years some people have been trying to persuade me to organise a theatre festival in Wrocław. However, after years of going to our national and foreign festivals I felt tired and fed up with the ever-present, dominating formula – let’s show the product and let’s watch the product. Because festivals reduce authors’ work to a product only, to a commodity for consumption. Festivals are not interested in the process of work or the context of work or the meaning of this work to people. I did not want to copy this formula but, at the same time, I didn’t have any answer to it, any idea. I kept looking for it and asking the same question over and over again: Why should a festival be really necessary?

I kept asking this question – just like the creator of Edinburgh Festival, Richard Demarco, did fifty years ago – what is important today? Demarco told me once: “When in 1948 we started the Edinburgh Festival, our aim was to restore German culture in Europe.”

This answer was really important to me. Over ten years ago I met a Swiss actress, Lea Wyler, who had had a big chance to make an acting career. However, many years ago her life brought her to India and Tibet. When she saw children who had been abandoned by their own culture and their own families, she decided to take care of them. Together with a Tibetan doctor Tulku Rinpoche she founded the Rokpa organization, which rebuilds Tibetan culture – schools, clinics, monasteries, helping children to retain their language, songs, tradition and spirituality.