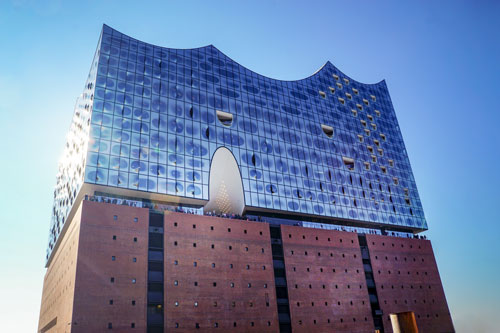 A PIECE OF MUSICAL HISTORY

Special moments have a unique history of evolution. The story of K&F VIDA L led to the installation in one of the world’s largest and acoustically most advanced concert halls, the Elbphilharmonie in Hamburg, Germany. It’s a remarkable story that began at Echo Klassik 2017, Germany’s Award Ceremony for classical music, which was broadcasted live on German Public Television.

Neumann & Müller (N&M), Germany’s leading event technology provider was in charge of technical aspects for the Award Ceremony and responsible for providing the broadcast sound feed. For the live audience sound N&M deployed several K&F VIDA L/C steerable column speakers for the precise coverage of the main audience area. The K&F VIDAs were covered with white stretch fabric and flown from a circle truss to fit in unobstrusively with the high end setting of this televised gala event. Attending representatives of the Elbphilharmonie Concert Hall were impressed by the superior sonic experience of the live sound and started a direct cooperation with KLING & FREITAG following the Award Ceremony.

The Elbphilharmonie was seeking the same sonic excellence along with the elegance of a small footprint. After an initial planning phase, N&M and KLING & FREITAG collaborated on setting up a K&F VIDA demonstration at the Concert Hall.

The demo showcased live system control via the K&F VIDA App, low latency reproduction and the ability to recall preset configurations to accommodate the wide range of applications at the Elbphilharmonie. The ability to change coverage and tuning so that the system can be optimized for speech and music was a huge improvement. The accuracy of KLING & FREITAG’s simulation was praised for being nearly identical when compared with the over 200 measurement locations. K&F VIDA C cardioid modules were used to enhance low frequency pattern control, allowing the system to have extraordinary full and musical sound yet maintain directivity.

These results and the additional involvement of companies AIR and ASC led to define the final configuration to best fit Elbphilharmonie’s Concert. A final live demo was performed which secured the order of the currently installed system.

The rest is history. In July 2018, the conversion to the new cluster took place, incorporating 18 K&F VIDA L and K&F VIDA C into the dome of the roof and an additional two K&F VIDA L/C-sets on either side of the stage.

“I was very pleasantly surprised by the even and authentic sound of the new speaker system. The rich and natural reproduction within Yasuhisa Toyota’s extremely accurate and lively acoustic design is impressive!” – Peter Schneekloth.

Peter Schneekloth has been working with reknown Tenor José Carreras for over 17 years, taking care of all sound engineering aspects. In August 2018 he had the opportunity to visit the grand concert hall at the Elbphilharmie and experience the newly installed Kling & Freitag VIDA L/C sound system.

“K&F VIDA is a precise and useful tool to greatly satisfy our special requirements regarding Sonic performance and Installation properties. With Kling & Freitag’s supplied GLL Data, we can create realistic simulations and ensure that our planning will work in each project. Beamsteering and cardioid low frequenzy pattern control perform as defined in theory, all while retaining great musicality. We are very happy with the flexibility for the broad range of applications in the grand concert hall.”