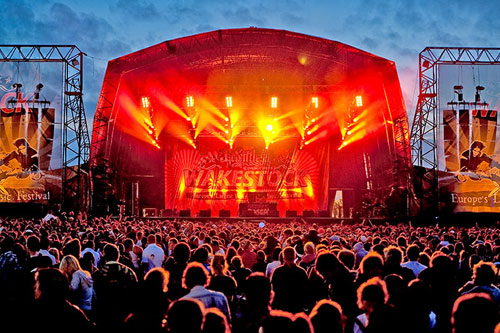 Wakestock is Europe’s largest wakeboard music festival, combining the cultures of music and the world’s fastest growing watersport in a weekend of high-octane excitement! It is held on the Llyn Peninsula in North Wales, in between Pwllheli and Llanbedrog.

Founded by Mark Durston, the festival began in Abersoch, North Wales back in 2000, when it was a wakeboard contest with a party in a car park for 800 people, and from then on played host to some of the industries leading bands and DJ’s, along with the biggest wakeboard competition in Europe. In 2010 the festival enters its second decade and becomes part of the World Wakeboard Series. The festival is split over three sites – the main festival site at Penrhos, Pwllheli Marina hosts the main wakeboard competition and Abersoch Bay hosts the Big Air Classic competition. The festival prides itself as being at the foot of the Snowdonia Mountains and looks out over Cardigan Bay. The festival has its own wakeboard ‘Pool Gap’ that allows the wakeboarders to showcase the sport up on the festival site. The Pool Gap consists of two pools containing a total of 200,000 gallons of water. They are connected by street style handrails that the wakeboarders slide along being towed by an overhead cable system.