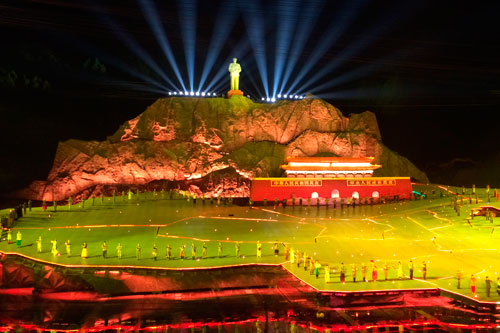 The well-known Chinese politician Mao Zedong was not only the chairman of China’s Communist Party for many years, but he was also the president of the People’s Republic of China from 1954 to 1959. During his period of office, his action turned him into one of the most influential politicians in history. For this reason, China regularly commemorates Mao on his birthday with various celebrations and events. In 2013, Mao’s birthday was marked for the 120th time. Enough reason to acknowledge this with something quite special.

Even just the rough basic data of the “China Has Mao” show are very impressive. 5,000 m2 stage; 3,000 m2 of rock for the scenery; 3,000 spectator seats; and, of course, let’s not forget the more than 130 loudspeakers from Kling & Freitag, which were largely built into the scenery. The stage was shaped as an oversized map of China, which was then subdivided into segments as the respective provinces. These segments are mobile and can be moved during the show in all three dimensions. The audience seats are just as flexible as the stage. The 3,000 seats are divided into segments and are moved very close to the stage during the show, for example. The audience is then part of the action when the various stage performances are presented. Another special feature is that the entire lower surface of the stage can be filled with water in seconds.

The main sound system consists of a total of 28 elements from the SEQUENZA 10 Line Array Series – boosted in the bass range by 16 NOMOS XLC subwoofers. In addition, a further 11 ACCESS B5 units were mounted beneath the audience seating for certain sound effects. A stereo sound system is installed in each of the sub-auditoria, bringing the total number of SEQUENZA 5 elements to 52. The audience seating area was also created with three VIP lounges with 15 CA 1001 and two SW 115 surround systems. Several CD 44 units are used as controllers.